The FTSE over the past week has traded down to the lower end of the trading range we highlighted a week or two ago. So the price action so far has behaved largely as expected. The question for the week ahead is whether the buyers will now re-emerge?

The index has seemed to find support from the previous 38.2% retracement level at 5561. This area also coincides with the near term bearish trend line, which was broken with the recent moves higher and now would be expected to offer support.

Also of interest is the chart below. One very useful technique for trader’s more interested in the technical is to invert the chart, as below. This inversion can act as an effective check on any inherent biases in the viewer. Also the reversing of the chart can make other formation more obvious.

For example on the inverted chart we can see the confirmed H&S pattern, with the Bullish trend line as the neck line. This suggests that the FTSE could post a move broadly equal to the height of the head from the neckline, to the downside. Ideally we prefer H&S patterns to have flatter necklines, but this does at least give some additional ammunition to those looking to buy the index in the coming days.

The bears however do not look to have entirely stepped aside here, rather just given some breathing room, on any expected near term, strength in the days ahead we would expect the upside to be capped towards the upper end of the current trading range. In essence though the tenet of TA is trade with the trend. The FTSE has broken resistance, posted an inverse head and shoulder and currently at the lower end of a bullish trading range, trading above some key support areas. So it is understandable that some may be quite optimistic here. Closes under 5560 would be needed to bring this near term bullish outlook into question. 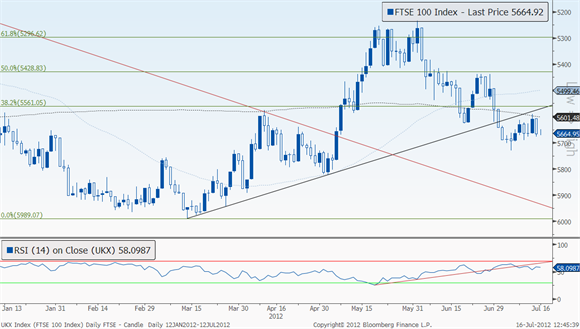 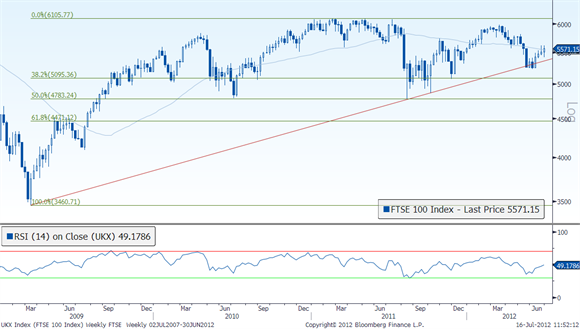 The situation on the Weekly chart will take some time to change greatly, so the text below again may remain broadly same week to week, until major levels are broken. As with the monthly chart below we will include all the information each week, so that new readers will have all the information to hand.

For the Weekly chart we can see how the FTSE 100 has clearly had a hard time breaking up through the 6,000 area over the past couple of years. We can also see how the current price action could well be the price moving down the right shoulder of a ‘head and shoulder’ pattern. It is much too early to call this pattern formally here, as the neckline would need to be breached, around 4,775, but it is still worth noting as this could result in medium term nervousness. Of interest is how this potential neckline coincides with the 50% retracement of the 2009 lows to the 2011 highs, so on any weakness down to this area we would expect to see strong support. 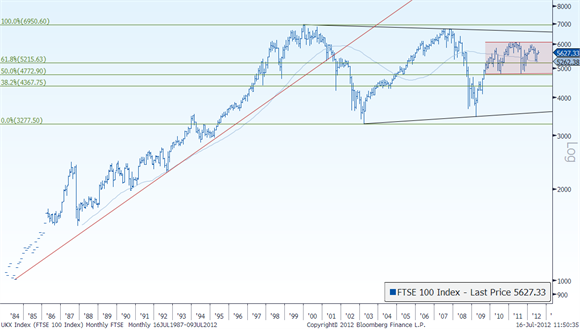 The monthly timescale naturally takes the long term view so the commentary in this section will only be updated as when market events dictate. So regular readers of this report will only need to read the monthly and weekly sections on a relatively infrequent basis. However we include all the information to give new readers the full picture.

The Monthly graph for the FTSE 100 quite clearly shows how the index posted an extremely powerful move into the end of the last century, red line.

From the all time highs in the index at 6950 the FTSE slumped 50% to the 2003 lows. In hindsight we can see this move as an understandable and even justifiable re-examination of the strong gains posted in the previous 20-30 years. The market currently remains well above these lows, which tells us that the Eurozone sovereign debt issues, technically at least, are not as significant as the general press would have us believe.

The FTSE remains in a trendless state, having posted lower highs in 2007, and higher lows in 2008, black lines. The retracement levels calculated from the all time highs to the 2003 lows create some interesting levels. We suspect that these levels will continue to be of use for the quarters ahead, a break back under the 61.8% level would suggest a new trading range between 4367-5215 would be possible. This area also coincides with the possible neckline of a major bearish H&S Pattern. Which would suggest strong support seen on any weakness down to 4775.

In summary then the FTSE 100 remains in a trendless state over the long term, with lower highs and higher lows, trading in the shadow of the TMT sell-off. Currently the index is seen to have a downward bias within this retracement channel, towards the 4775 area, (the 50% retracement level), but that on any such weakness strong support would be expected.