While the Dow and S&P500 eased back yesterday on low volumes, the Nasdaq’s intraday high of 2,799.84 was the highest level since December 2000.

It looks like the US indices are now encountering resistance following 6 weeks of consecutive gains and some weakness near term looks to be on the cards, particularly as traders return from holidays. September and October are historically volatile months and we could experience some turbulence, but in our view this will prove short-lived. Regular readers will know that we have been bullish on markets for the past few months with Spain, Italy & Japan our favoured regions – these have all materially outperformed over the last month and some spectacular spreadbetting gains could have been had. That said, it is always prudent to book a degree of profit and we think that the Nasdaq is now likely to struggle to push on through the resistance level highlighted below.

Turning to other equity markets China appears to be stepping up their fiscal stimulus efforts with the People’s Bank of China ramping up its reverse-repurchase operations by 220bn yuan ($34.6bn) and reports that Beijing is considering fresh stimulus measures over coming months.

European stocks were stronger on the back of the noises being made regarding further debt monetisation but also a growing belief that European leaders are moving toward a cohesive plan for the debt crisis.

Francois Hollande and Angela Merkel are to meet with Greek Prime Minister Antonis Samaras later this week, and speculation mounts that Merkel will agree to more concessions provided the main points of the aid-for-reform plan are adhered to. It has been suggested Greece will ask for – and get – a two year extension to enable it to implement reforms. This will likely be views as positive by the markets but it should be noted that the euro has seen some good strength over the past couple of weeks and again, for those who have been long, profit booking is also prudent in our opinion.

There was also talk of the ECB going against the Bundesbank’s wishes in capping bond yields. At some point a standoff between the ECB and the Bundesbank looks to be an inevitability. One British newspaper confirmed ECB technicians are examining plans to cap Spanish and Italian bond yields, notwithstanding ECB denials yesterday.

Separately, Fitch Ratings has suggested the ECB might be able to act without the Bundesbank, and expressed a more optimistic outlook for Europe. They believe that the crisis will be resolved and the Eurozone remain intact; and Italy does not need further austerity. Meanwhile Spanish and Italian bond yields continued to fall amid the growing belief the ECB will soon enter the market as a buyer. 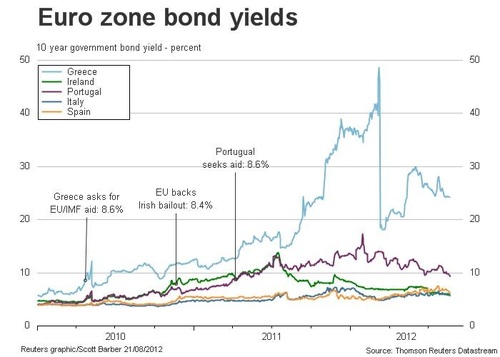 Spanish and Italian bond yields are now well done from the “death zone” above 7%. Further buying by the ECB could push them back below 5%. 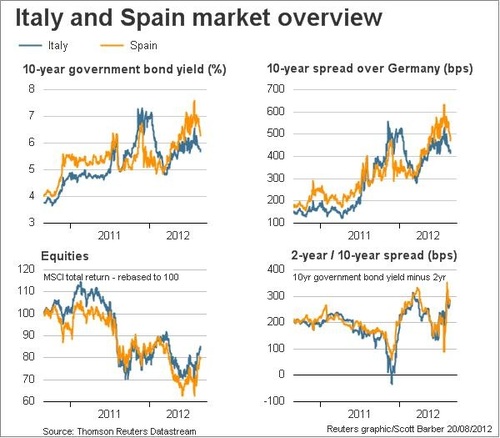