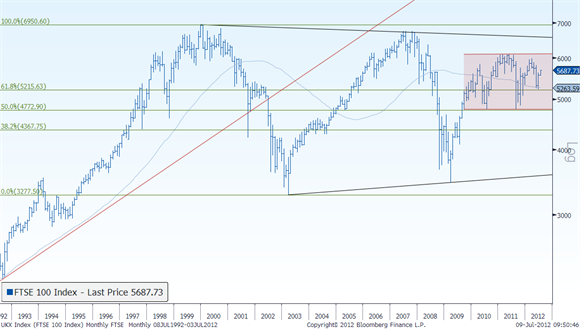 This report will continue to focus on the Monthly, Weekly and only then the Daily charts. The monthly timescale naturally takes the long term view so the commentary in this section will only be updated as when market events dictate. So regular readers of this report will only need to read the monthly and weekly sections on a relatively infrequent basis. However we include all the information to give new readers the full picture.

The Monthly graph for the FTSE 100 quite clearly shows how the index posted an extremely powerful move into the end of the last century, red line.

From the all time highs in the index at 6950 the FTSE slumped 50% to the 2003 lows. In hindsight we can see this move as an understandable and even justifiable re-examination of the strong gains posted in the previous 20-30 years. The market currently remains well above these lows, which tells us that the Eurozone sovereign debt issues, technically at least, are not as significant as the general press would have us believe.

The FTSE remains in a trendless state, having posted lower highs in 2007, and higher lows in 2008, black lines. The retracement levels calculated from the all time highs to the 2003 lows create some interesting levels. We suspect that these levels will continue to be of use for the quarters ahead, a break back under the 61.8% level would suggest a new trading range between 4367-5215 would be possible. This area also coincides with the possible neckline of a major bearish H&S Pattern. Which would suggest strong support seen on any weakness down to 4775.

In summary then the FTSE 100 remains in a trendless state over the long term, trading in the shadow of the TMT sell-off. Currently the index is seen to have a downward bias within this retracement channel, down towards the 4775 area, (the 50% retracement level), but that on any such move strong support would be expected. 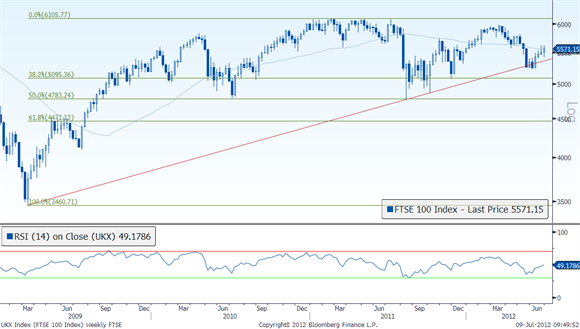 The situation on the Weekly chart will also take some time to change greatly, so the text below again may remain broadly same week to week, until major levels are broken. As with the monthly chart however we will include all the information each week so that new readers will have all the information to hand.

For the Weekly chart we can see how the FTSE 100 has clearly had a hard time breaking up through the 6,000 area over the past couple of years. We can also see how the current price action could well be the price moving down the right shoulder of a ‘head and shoulder’ pattern. It is much too early to call this pattern formally here, as the neckline would need to be breached, around 4,775, but it is still worth noting as this could result in medium term nervousness. Of interest is how this potential neckline coincides with the 50% retracement of the 2009 lows to the 2011 highs, so on any weakness down to this area we would expect to see strong support.

The current price action seems to be gaining some support from the medium term trend line, red line, but we continue to feel that the more dominant areas will be the Fibonacci retracement levels highlighted on the charts. 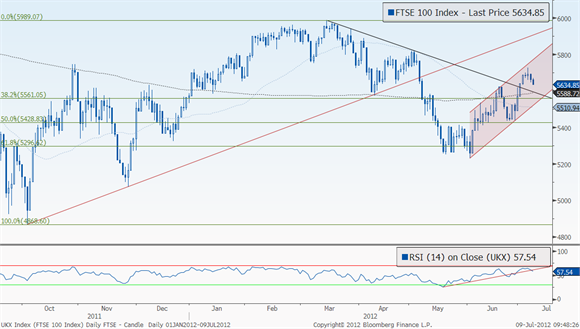 The FTSE over the past week has managed to trade through the near term bearish trend, black line, a more positive performance than we had been expecting. Setting up a bullish near term trading range, red region.

The RSI has managed to post a fresh higher high, in line with the price action, which was required as without this the resulting divergence would have been a cause for concern. Of minor concerns is how the FTSE has broken its near term RSI Trend line, red line, and how the price action has posted a bearish engulfing candlestick pattern in the past couple of days. Which heralds that the positive trend may have just done enough for now.

As a result we do see the FTSE as looking vulnerable to falls down towards 5561, in the next few days, the 38.2% retracement area. However we would expect buying interest to be quite strong on any such weakness, so see any profit taking that may emerge as having a limited downside.

Leaving some near term profit taking seen ahead, with relatively limited down side seen. Closes under 5561 will be needed to break this near term optimistic view. 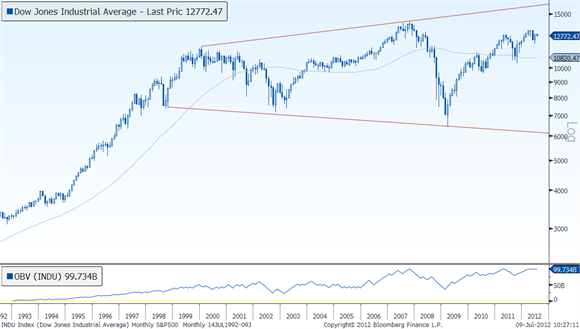 The US markets continue to look to lift the FTSE higher over the long term. We include the Monthly Dow graph above to highlight this effect. The Dow is now back within touching distance of its all time highs, a quite remarkable performance from the 2009 Lehman crisis led lows.

(The slight caveat to this is the price-weighted nature of the Dow Jones, rather than the market capitalisation weighted calculations used for the S&P 500 and FTSE 100, but even taking this into account the gains have been impressive.)

The longer term trend clearly continues to discount the Eurozone debt concerns and is counter somewhat to the public mood which seems hypnotised by daily developments in the Eurozone.