After a strong start to yesterday, Wall Street struggled to maintain momentum after a number of corporates reported weaker earnings and concerns arose over Germany’s follow through on Summit resolutions. The DOW closed out the session down 83 points. Although the reporting season got off to a reasonable start, Wall Street is going to be highly sensitive to the coming stream of earnings releases. We still believe that a worst case scenario has been priced in and any positive surprises or better than expected results will be supportive for the market.

There is no doubt we are dealing with very negative sentiment globally, with many market participants unable to look much beyond the prevailing pessimism. Despite the gloom, the FTSE 1000 is still well above the June low of 5260. We have yet to experience a “cataclysmic” decline this year that is on a par with 2008, 2010 and 2011, but the prevailing sentiment is as bad – if not worse.

The trend on the FTSE 100 is clearly to the upside. Support in the near term is located between the 5,581/5615 region, which is made up of the 38.2% and 50% Fibonacci retracements.. Whilst China’s economy remains centre stage in terms of a focal point, attention will be focused on our own reporting season which will get underway in a few weeks time. Like the US, the market appears to be pricing in a worst-case scenario which opens the window for positive surprises.

The correction in equity markets this year has been particularly sharp for the resource sector with investors increasingly worried about the economic slowdown in China. Yesterday added to these fears with Chinese import growth slowing from 12.7% to 6.3% in June, which was below expectations of an 11.3% increase. Export growth also didn’t help, slowing from 15.3% to 11.3%, however the lower than expected Chinese imports pushed the trade surplus to a three-year high of $31.7bn.

Although the latest figure remains below the peak level (at the top of the resources boom) just prior to the GFC in 2008, the seasonal low point earlier in the year has corrected andChina’s trade surplus is now back to normalised levels.

We think this point may have been dismissed by the markets yesterday as focus shifted back towards Europe, but this is hardly apocalyptic evidence of the four horsemen about to arrive and take China (and the global economy) down into the abyss.

At least China is not going have to worry about paying for fiscal stimulus measures to boost consumer demand internally, sitting on more than $3 trillion in foreign exchange reserves, which are now growing again. As highlighted yesterday, China is now in position to pull the levers once again within its own economy to maintain growth. Given the considerable resources available and the benign levels of inflation, there is no point in China holding back. 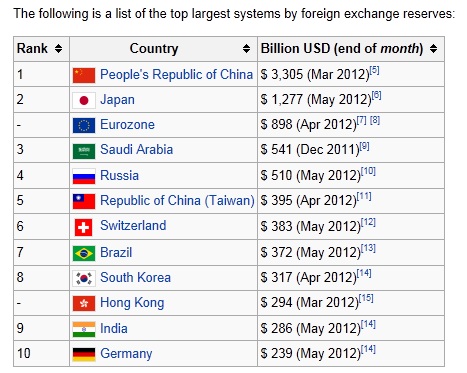 One point worth mentioning is that despite the prevailing gloom and negativity overall equity markets are proving to be quite resilient. The black swan event (that everyone seems to expect) has failed to materialise.

European bourses were in a more positive mood following news from the ecofin meeting that the rescue package for Spain’s banks had been ratified, and aone year extension was granted to reach the 3% deficit target. Spanish banks will have access to up to €30bn in funding by the end of the month, while the final cost – which might still hit the €100bn limit – should be known by July 20th.

Spanish 10-year bond yields responded positively falling below 7%. Some better-than-expected production data from the UK – gaining 1% in May – and Italy, added to the mood. Meanwhile the German Consititutional Court is considering whether the new EU bailout scheme and budget rules are within German law. Finance minister Wolfgang Schäuble testified that a delay could fuel further turbulence in the markets and engender a loss of confidence in the EU’s ability to make decisions.

Europe nevertheless closed higher amid speculation the court would give the new bailout fund the green light, thus paving the way for it to be used more flexibly. The FTSE gained 0.64%, closing up 36.74 at 5,664.07; while the CAC and DAX gained 0.59% and 0.79% respectively.

On the gold front, the price action has been very disappointing but WEthink our thesis still needs time to bear itself out. We know that the central banks will have print more money in the future, and that the problems facing the Eurozone will take years to sort out. Against that backdrop, gold still remains in our opinion a cornerstone asset in any portfolio in the current environment and gold shares are historically very cheap.

On that note, in the US the keenly awaited FOMC minutes will be released today, providing an insight into the board’s thinking and thoughts at the last meeting. Our view is that they will reveal the Fed is deeply concerned about the labour market, and Europe, but has been keeping its powder dry. The next FOMC meeting is at the end of the month. Gold has reacted to the lack of follow through from the Fed in the near term, but this could all change in the next few weeks, particularly with the unemployment rate now back above 8.2%.

Last but not least, the Bank of Japan has begun a two day policy meeting andwhilst the markets seem to think nothing will happen, we can’t rule out any intervention, particularly with the export sector struggling against such a strong yen.