Economic statistics out of Europe yesterday threw more gloom over the European landscape – particularly on the periphery.

Germany’s GDP slowed from 0.5% to 0.3% during the second quarter, albeit still above forecasts of 0.1%. France provided a pleasant surprise, posting a third consecutive quarter of zero growth and not the 0.1% contraction expected thus alleviating fears of the possibility of slipping into recession for the time being. 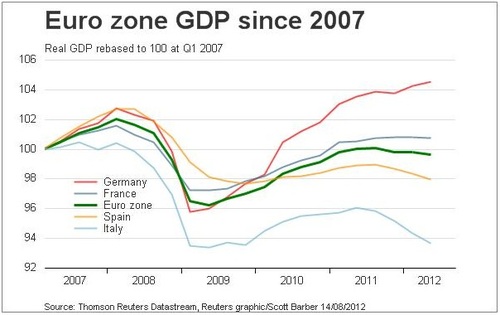 On the periphery, it was a different issue with an aggregate 0.2% contraction overall and with Italy in particular suffering. This tepid growth is widely viewed as strengthening the case for further stimulus measures in Europe.

Yesterday we discussed how the lower than expected gain in Japan’s second quarter GDP would likely see the Bank of Japan soon step up its own policy easing and suggested a long position in sterling:yen which is already playing out nicely. Any move by the bank could well provide a sustained leg up in Japanese equities, and we remain positive there as evidenced by our Conviction Buy call on the Nikkei at 8600 and which expect to run for a number of months. There are many quality companies trading at low historic earnings valuations and discounts to book value.

Meanwhile one ‘value’ stock that has been overhyped to the downside in our opinion is Standard Chartered, which we traded well last week. This morning the bank announced a $340 million settlement with one New York banking regulator over transactions for Iranian clients. Whilst not completely over, this ‘fine’ is a far cry from the billion plus fall seen in the bank’s market cap last week when news of allegations first emerged.

The Bank of England publishes its minutes from this month’s Monetary Policy Meeting shortly, which could provides clues as to future easing measures.

In the US CPI, Industrial Production, Capacity Untilisation, and the Empire State Manufacturing index are all due out too.