HOME > Latest > Bull markets are born on pessimism, expand on optimism and die on euphoria. Japan is in the embryonic stage of a bull market

On Friday the US Labor market continued to show signs of struggling with the jobless rate remaining at 8.2%. No US President has been re-elected to office when the unemployment rate has been above 8%, so Obama will have his work cut out for him in what is likely to be a make or break 6 month period running into the election at the end of the year. President Reagan is the only president to have been re-elected since World War II with unemployment above 6 percent, so this will be the central issue at the next election.

Consensus forecasts called for an increase of 100,000 in private payrolls in June, but the actual number was 20% lower at 80,000 which needless to say missed the mark by a wide margin. The pressure will now be building on both the Government and the Federal Reserve to implement pro growth policies.Our view is that the Fed will now more than likely commit to another round of quantitative easing at the next meeting.

Bernanke has continually raised sluggish US employment as a key risk to the economy. With the Fed distracted by Europe at the last meeting, we think the focus will now return to domestic issues. Bernanke outlined in April this year that the US economy needs job creation of around 150,000 to 200,000 a month to bring the unemployment rate down, so the by that measure the US economy is clearly missing the mark. Obama will also be under pressure to have some form of fiscal policy response.

The gold price also weakened on Friday as frustrations mount over a lack of QE from the Federal Reserve. But we need to remember that the world was precariously balanced on the edge a few weeks ago prior to the European Summit. There were clear risks then that the Germany would fail to produce any material compromise and we think the Fed was positioning itself then for any “negative surprises”.

Gold is coiling up within a converging trading range and we can expect a sharp breakout at some point. We still favour the bullish scenario near term, with the likely catalyst being further easy monetary policy accommodation by the Fed.

Clearly, a failure to move by the Fed near term will be negative for gold and this raises the prospects of an extended correction. We have seen the ECB, Bank of England and Chinese central bank all move to ease monetary conditions in the past few weeks, we therefore continue to believe the prospects of Japan and the US following suit as being good.

Eyeballs now will swing towards the US earnings season to see what extent mixed data economically is feeding through to the corporate sector. Kicking off proceedings will be Alcoa, which reports quarterly results tonight. The resource bellwether frequently sets the tone for the rest of the industry and as a mini proxy for global growth, the aluminium heavyweight’s results will be closely watched. Market consensus forecasts are for quarterly earnings to fall by 1.1 percent.

The last round of quarterly results was somewhat positive with more companies beating expectations than disappointing. What will be key this time round is to what extent weak macro numbers are impacting company profits.

Meanwhile back in Europe, EU leaders continue to be moving towards a more unified stance, glimmers of which were on display at the Summit. Over the weekend French President Francois Hollande and German Chancellor Angela Merkel met and it was encouraging to see that both talked about ‘friendship between Europe’s biggest economies’ being the key to saving the euro, and addressing the zone’s debt crisis.

Going into the Summit Hollande and Merkel were very much at odds, but some headway was certainly made with the key agreements on easing bailout access, and setting up Europe-wide bank supervision. And importantly words will be put into action with EU Finance Ministers meeting in Brussels tomorrow and a wider meet again on July 20.

One key thing that remains to be nailed down is exactly how direct capital injections into Spanish banks and other institutions are to be structured. Also remaining up in the air is the stickier issue of Euro Bonds which France and others are in favour of. However this may be untenable while Angela Merkel is at the helm in Germany.

Much continues to hang in the balance with respect to decisions made by EU governments and central bankers but investors are certainly gaining ‘some’ confidence. Whilst European indices were down on Friday, in sympathy with the jobs numbers, they finished the week up – the Stoxx 600 ended ahead 1.3 percent last week, the fifth positive week in a row.

The Japanese stock market is one of the cheapest globally in our opinion, and after a lengthy bear market that began back in 1989, most of the public have their savings invested in cash deposits and bonds.

The fact that stocks have gone nowhere in what has been a lost decade has conditioned the Japanese public so that they no longer believe in equities as viable investments, which is understandable. Yet these conditions are precisely what are needed for the next bull markets. 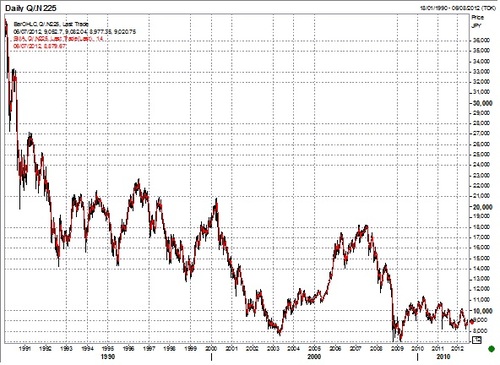 Bull markets are born on pessimism, expand on optimism and die on euphoria. In Japan’s case after fighting deflation for 20 years, the Bank of Japan (which meets on July 12th) may now begin to copy other central banks and print money to lower the currency. A weaker yen would be a powerful catalyst for the stock market, with many Japanese companies being high quality, large multinational corporations with globally diversified revenue streams.

The fact that many of these companies sell for less than book value is testament to the underlying value being offered today.

Many of the bears will point to Japan’s underlying demographic trends with a population that is aging and in decline as a reason for avoidance, with the obvious negative implications on GDP. Some experts are predicting the population will decline by 50% by 2050.

If one takes a look at history however, there are few examples of a nations’ population declining by more than 30% in the past 1000 years.Europe’s population declined sharply in the middle ages with the onset of the Black Death where one in 3 died. The disease wiped out a large chunk of the population which ultimately transformed the economy as wage rates went through the roof on the back of labor shortages. Apart from Europe there are not many other examples.

Self-preservation is a powerful motivation, and we have no doubt that Japan’s population will at some point begin to grow again, because if the experts are right then the future economy of Japan and the nation itself will face a serious threat.

Great buying opportunities for value investors often emerge during the deepest times of pessimism when markets become indiscriminate as it relates to price and value.