The continued rising tension between China & Japan is weighing further on Chinese equities in particular with the index hovering at a new 4 year low just over the key psychological level of 2000 (see below). 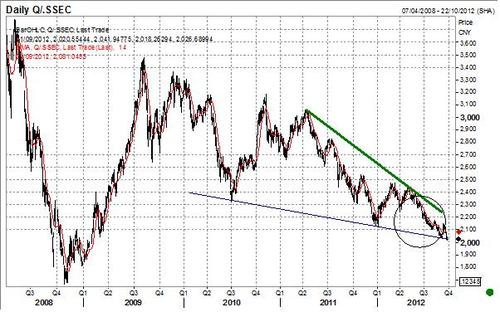 As we covered in our latest edition of our magazine in setting out the Buy case for the Chinese stock market (Page 44, link here -http://issuu.com/spreadbetmagazine/docs/spreadbet-magazine-v9_generic), it seems that participants are still concerned that the Chinese economy is slowing down more than the statistics and economic data belies.

However contrary to the current consensus we believe that the downward momentum is dissipating and that the stock market is now cheap relative to other equity markets. Even if growth does fall to 6/7% in the year ahead, relative to the underlying PE which is currently around 8, China is beginning to look very attractive indeed aswell as Japan of which we have been Bulls all year.

When stock markets bottom out, no one typically rings the bell or shouts from the town steeple that the bear market is over. Quite to the contrary, major bottoms are generallyu forged in environments of low trading volumes as the sellers become exhausted and an increasing cacophony of negative commentary and bearish sentiment. At times, this can become almost irrational, especially with the “herd” mustered together and self reinforcing each other…

Think back to June when we reached the last low and negativity was all pervading with many believing the world to be on the edge of an abyss. Since then, the opposite has occurred to what the consensus expected. Stock markets have risen around the world and some such as the United States are not far below all time record highs.

We think China is currently tracing out a bottom. Sure, it may have a toes below 2000 but in the same way that the FTSE 100 refused to go decisively below 5000 and the DOW below 11,000 we expect this to be short-lived and the final bear shaking exercise.

Adding to the argument that we are near the nadir in Chine, copper has been on the move recently and we can see a clear break to the upside in one of the world’s most important base metals in the chart below 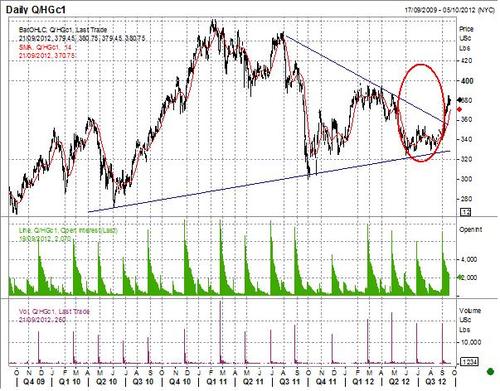 This is highly encouraging for the rest of the resources complex. The markets remain fixated on the iron ore price which recently traded at 5 year lows; however recent price action has been better. Few seem to be paying attention to the copper price which is pushing up towards the all time high.

We think copper stocks are going to have a run and now is a time to revisit the sector. The way commodity prices are behaving is to be expected given the considerable quantitative easing efforts of the central banks in recent months. There will be more to come of that we‘re sure and with it ongoing weakness in the world’s major currencies. As with gold, commodities will benefit from a wholesale reduction in the purchasing power of money. We therefore believe now is not a time to be listening to the now very loud cacophony coming from the China bears and we certainly would not be unloading resource stocks at currently heavily discounted prices.

Bumi was one of our picks in our latest edition and the price action since then has been shocking to say the least – it illustrates the importance of diversifying and not over-leveraging your portfolio. We have taken a hit on Bumi put through judicious position control, live to fight another day and possibly purchase more once the fog clears of the sorry state of affairs.