Risk was again off the table towards the end of the week with key European and US indices declining on ‘renewed’ fears over global economic growth o Thursday, and as ‘disappointment’ over the lack of decisive action by the Fed began to sink in. We remarked that recent market stability did not mean we were out of the woods. This was in plain evidence overnight Thursday with the VIX rising back above 20, whilst commodities also retreated. However this did nothing to dispel our belief that we will not see a deep correction from here. The Fed and other central bankers remain both ready, and crucially, willing to act. The question is not so much if but when.

The Dow has corrected sharply back towards support at 12500 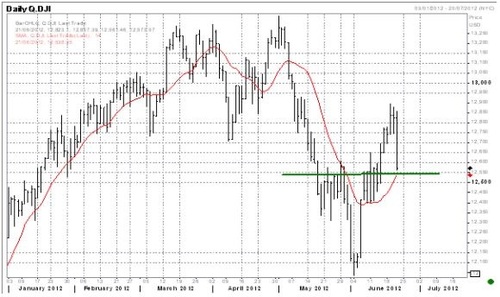 We firmly believe that that many investors are confusing the lack of decisive action as an indication of a lack of ‘willingness’ on the part of the central banks. We can understand that the Fed and others don’t want to play all their cards as once. Whilst some were disappointed by the lack of guidance on further quantitative easing, there will be plenty of opportunities for the FED to engage in this.

By the same token, some investors were disappointed that the amount set aside to bailout the Spanish banks was not a bigger number – but that is not the function of a lack of money in the tin.

We were drawn to comments by former Fed Chairman Alan Greenspan yesterday in an interview with Bloomberg. He acknowledged economic growth challenges, but also talked about the ‘global slack in the economy’ making it ‘easy’ for central banks to resolve crisis. At first glance this may seem out of touch, but Mr Greenspan’s point is one we have made regularly. Central banks have the capacity to engage in easing, including printing money, and with inflation at historic lows, have the capacity to do so. With such flexibility further stimulus is a given if economic growth falters further. As Mr Greenspan puts it central banks can ‘create large idle balances’ and it is ‘the easiest course of action politically’.

And certainly there is of course every sign that the central banks will need to step in, as data overnight showed.

The Philly Fed, regarded as a strong barometer of demand posted a reading of -16, indicating contraction; home sales fell last month – even though price rose causing some to doubt the incipient recovery in real estate. Pertinently, the weekly jobless fell slightly to 387,000 – and while above 350,000 – critically remains well below last year’s crucial 400,000 mark.

Germany meanwhile suffered the biggest contraction in manufacturing activity in three years in June as the manufacturing PMI fell to 44.7 from 45.2 in May, but encouragingly French manufacturing decreased at a slower rate: the seasonally adjusted PMI posted a two-month high of 45.3, up from 44.7 and higher than the forecast 44.5.

Spain managed to sell €2.22bn in debt, more than the €2bn top-end target. However, borrowing costs surged as it was revealed that the recapitalisation of the Spanish banking sector will cost up to €62bn, according to two independent auditors. But again this is not a number that is out of reach in terms of the EU bailout war chest.

Much could depend on the forthcoming meeting of European leaders following the conclusion of the G20 talkfest. The challenge remains with a European political class that has been unable to- hitherto – reach agreement. The Germans want fiscal union before agreeing to further debt sharing, while the rest, led by France, Italy, and Spain appear not quite ready to surrender fiscal sovereignty. Germany and the survival instinct should ultimately prevail, or perhaps “he who pays the piper, calls the tune…”

We believe that Europe needs to learn from history and do as the Americans did over 200 years ago and look to replace Maastricht with a single European constitution. Essentially in 1790 all US state debt was converted to federal debt, backed by federal taxes and foreign loans following some hefty haircuts. Fiscal union will, by necessity ultimately lead to political union, as most politicians and voters are only too well aware. This latter objective is a huge undertaking and will take time.

Chinese manufacturing contracted for an eighth consecutive month as the June PMI eased to 48.1 from 48.4 in May. But again as we have said before, we are not so concerned about a slowdown in China – this is inevitable. A measured landing to more sustainable levels of growth is to be encouraged and something the Chinese Central Banks has already flagged as something that will aim to facilitate.

There was also of course disappointment lingering over the Fed’s announcement yesterday that it would only twist again, thus keeping the powder dry for the big bazooka.

The extension to “operation twist” had been viewed largely as a fait accompli as much of the rally in the lead up to the FOMC meeting had been fuelled by expectations of further QE, disappointment and profit-taking inevitably ensued. But we believe they stand at the ready.

And this is what many market participants are missing.

Clearly investors are fearful, as the increase in VIX back above 20 last night shows. But what has really changed in the last 48 hours? We know that Europe has issues, we know that global growth faces challenges, but we also still know that the central bankers and governments are standing behind their economies, and markets. 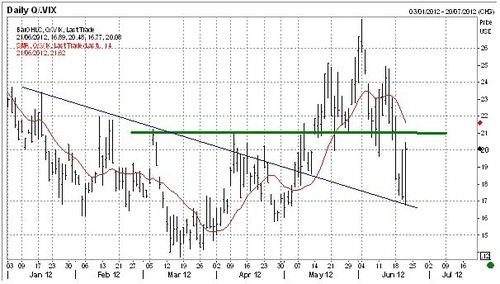 We may well get further volatility, but we don’t believe we are going into the abyss. When investors realise the actual risk has diverged significantly from perceived risk, equities will rally. That is why we are sticking to our belief that markets will finish the year with strong gains.

And this belief is why we continue to seek out quality stocks at cheap valuations. And any further indiscriminate selling by markets driven on fear will ensure these are readily available.

Given the increase in fear overnight it was not surprise that oil pulled back to around $78. However, we still don’t see oil falling much further from here. We also note that negotiations with Iran seem to have reached another stalemate which will underpin prices to some extent. At current levels it will greatly help the global economy, removing a significant headwind from 6 months ago when crude prices were up around the $110 level.

Gold also pulled back last night, down by $50 to $1565. Gold bulls over the past decade have become used to such pull-backs, however we don’t believe we are at the end of the bull run…far from it. Gold price weakness has again been down to a disappointment over the lack of further action on the QE front. But again investors are confusing a lack of action with a lack of willingness. If economies and markets deteriorate further then QE is a given, if they rebound strongly, then gold will still be pricing in the inflationary consequences. 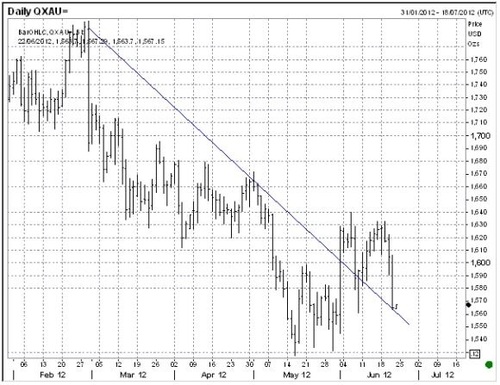 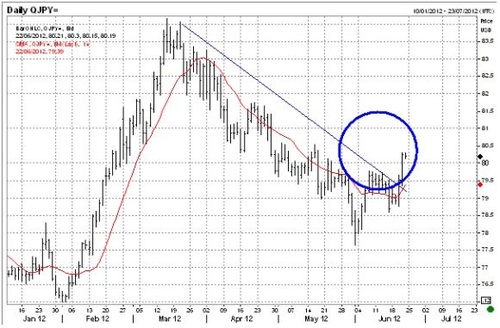 The Japanese yen is on the verge of significant medium term reversal and we anticipate a breakout above resistance at 79.60 to the upside (currently it has pushed up to 80.30). This upward break has significant implications for financial markets with, despite last night’s price action, risk aversion by market participants generally abating in recent weeks. The upward move in the yen is another sign as investors move back out of yen denominated bonds and cash.

This will also have positive implications for the Nikkei which bucked the trend in Asia yesterday rising by 1 percent where most other markets declined. We anticipate a strong relief rally in the Nikkei which should take the index back up above 9000 as equities rally from very oversold levels. We have acquired holdings in Sony, Toyota Motors and Nomura Holdings amongst other companies, all of which are trading at a substantial discount to book value.

Firstly, Cameron triggered a war of words with France by promising to “roll out the red carpet” for French firms if new President Francois Hollande follows through on his plan to raise taxes for the wealthy. Who could forget former French President Nicolas Sarkozy’s comment that Cameron had “missed a great opportunity to shut his mouth.” Cameron has rarely seen eye to eye with French leadership and his latest comments triggered a cool response from the new President’s entourage.

And there is the renewing of hostilities with Argentina. It appeared that Argentina’s President Cristina Fernandez attempted to hand Cameron an envelope which allegedly contained several dozen United Nations resolutions calling for dialogue over the Falkland Islands. Cameron refused to accept and responded by reminding Fernandez of the upcoming referendum in the Falklands and the right to self determination.

It is not the in the last few days that and Argentinean and Brit have clashed. Cameron beware… 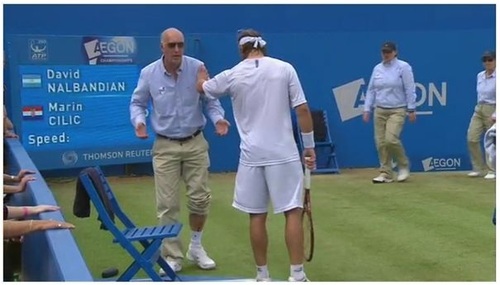 Cameron and his European counterparts threaten to annoy all those financially impacted Europeans by broadcasting reassuring austerity messages from a luxurious sun soaked Los Cabos. It has been claimed that broadcasters have been told to omit the picturesque views when interviewing the Prime Minister but one gets the feeling that there is a PR gaffe waiting to happen. Maybe Siberia or Manchester would have been better choices?!