The S&P 500 was virtually flat yesterday after rallying off intraday lows and shrugging off the FOMC minutes released earlier in the session. The notes of last month’s meeting revealed that the Fed remains reluctant to engage in further QE unless certain “hurdles” are met. Whilst a few members expressed their views that further policy stimulus was necessary to reduce unemployment, the consensus (including Bernanke) seemed to be that adopting a ‘wait and see’ approach whilst the US economy goes through a typical “summer malaise” was the most sensible course. Interestingly, gold was up $10 to $1577 and WTI oil rallied 3% to $86. 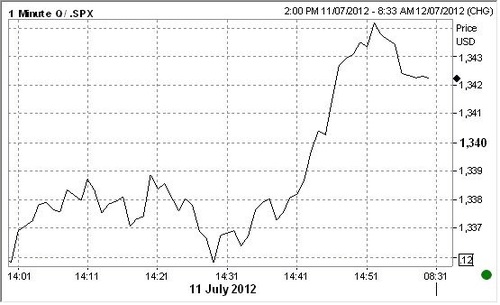 Also in the news yesterday were pictures of violent clashes and rioting in Spain as protestors rally against the austerity measures. One can completely understand the plight of the Spanish people who are facing an unemployment rate of more than 20%.

To place that in historical context, during the Great Depression of the 1930s, US unemployment rose to around 20% and it was at that level that President Roosevelt initiated the New Deal and 5 year plan which involved massive infrastructure programs (such as the Hoover Dam) which were aimed at putting the public back to work. After initially imposing austerity measures which imploded GDP, it was only after unemployment hit 20% that the US government realised that saving the banking system and ramping up fiscal spending was the key to reversing the downward spiral in the economy.

Yesterday Spanish Prime Minister Mariano Rajoy announced another round of austerity measures in an attempt to achieve deficit targets amid a severe recession. He unveiled tax increases and spending cuts aimed to reduce the budget deficit by €65bn over two years: VAT increases to 21% from 18% while unemployment benefits and government salaries are cut, while savings will be sought from local government reforms. This follows the EU agreeing to provide €30bn to Spain’s troubled banks on Monday and asking the country to take further deficit reduction measures.

Meanwhile the International Labour Organization (ILO) warned that Europe faces the risk of losing a further 4.5 million jobs over the next four years if policymakers do not change the current course of action, urging a concerted policy shift towards job creation.

The pain in Spain remains and the poverty and economic hardship must be almost on a par with the US, although we must point out that social welfare programs and public safety nets have come along way in 80 years.There is no doubt this has mitigated the harsh impact of a 20% plus unemployment rate, although we cannot discount the gravity of the current situation. The challenges facing the Spanish government at this time are significant.

Spanish unemployment could level out at 25% in 2013, with one in four out of work. 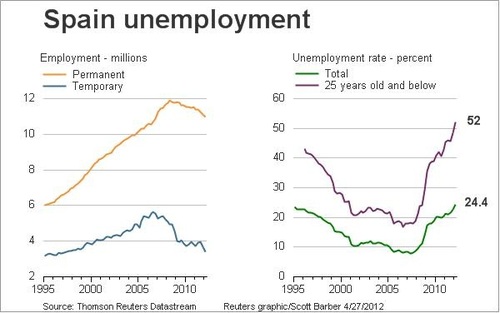 The social cost of having so many out of work is immense. What Spain’s economy needs is breathing space so that GDP growth can be restored, which in turn creates a positive feedback loop with job creation. For this reason alone,Germany has to play a central leadership role and grant Spain and other problematic Eurozone economies an economic lifeline to allow their respective economies to recover.

It is fascinating to look back at the genesis of the Spanish debt crisis, which like the GFC that was precipitated in America, coincided with the bursting of a massive real estate/credit bubble. Easy credit, low interest rates and cheap money led to a massive real estate bubble that continued to inflate well past any sensible point of commercial reality.

When Spain joined the Eurozone, the great benefit lauded at the time was that real interest rates would fall and provide the economy with access to cheaper credit. However this was akin to providing free narcotics to a drug addict, and the Spanish economy along with others embarked on a credit binge of epic proportions. To extend the analogy, many might disagree, but an argument could almost be made that Germany was “the dealer”providing the “free hits” to the addicts at the onset of the boom, only to step in after the junkie was hooked.

Germany would argue that each nation is responsible for its own destiny, and that the credit binge was caused by poor economic management. And that argument is correct to a point, but countries such as Spain, Greece, Italy and Portugal have historically always had high relative interest rates. It was irresistible to those economies when those rates fell.

Of course the great irony today is that Germany enjoys the lowest interest rates of all time, whilst the likes of Spain and Italy are now having to deal with interest rates levels of old, and thus creating an uneven playing field. For the present situation to correct itself and indeed for the Eurozone to survive, those imbalances must be addressed.

Equity markets are clearly marking time ahead of the next FOMC meeting at the end of the month. The market greeted last month’s meeting with a yawn when the Fed announced that it would extend Operation Twist.

Interestingly, US politics produced a fascinating spectacle last night with Mitt Romney being openly booed in an Obama electorate stronghold. With US unemployment above 8.2%, the Republicans might be mistiming their strategy of winding back social welfare programs such as “Obamacare”.

It would be interesting indeed if history looked back on Obama as not only the first black US President, but the first one to be re-elected with unemployment above 8%. As a footnote aside, it will be equally interesting to see what Obama does in 2013 when Bernanke’s tenure as head of the Federal Reserve expires and whether he is re-appointed. The next FOMC meeting in a few weeks time will be critical.